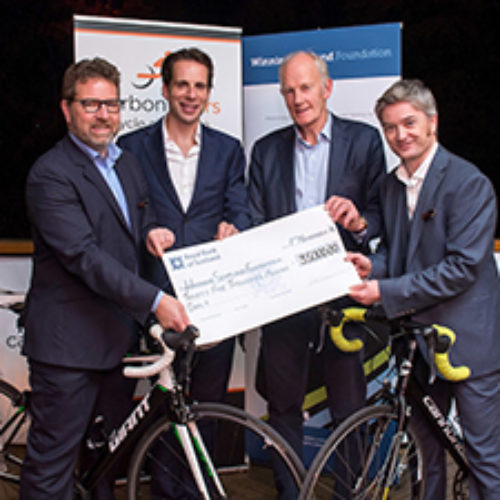 The Carbon team, who completed climbs totalling 33,500 feet while negotiating the scenic but often perilous roads of the North of Scotland, raised a remarkable £35,000 for Winning Scotland Foundation.

Winning Scotland Foundation provides a structure for top athletes and adventurers to visit schools and share their stories in a meaningful way with young people, inspiring self-belief, self-reliance and life skills designed to help them become the best they can be.

The final amount raised was made possible through the generous support of Carbon’s corporate partners – Johnston Smillie, Maven, Sarn Technologies, Fifth Ring and Craneware – staff, clients and friends. Carbon gives its heart-felt thanks to all.

Carbon offices across Scotland in Perth, Aberdeen and Edinburgh also supported the fundraiser with a retro food day, tray bakes, a cheese and wine evening and by participating in the Kilt Walk, so the venture was very much a team effort.

“I saw that Mark had taken on the North Coast 500 and that provided the inspiration for our fifth anniversary challenge, although the Carbon team decided to tackle it over five days rather than to challenge Mark’s non-stop 37 hours and 58 minute record!

“But our team completed an incredible journey for a great cause, overcoming wind, rain and cold en-route from the start to finish in Inverness.”

To open the evening adventurer Mark gave a flavour of some of the incredible challenges he had tackled in the past, including cycling 18,000 miles round the world in a record-breaking 194 days and 17 hours, pedalling the length of the Americas, and last year travelling through Africa from Cairo to Cape Town.

Turning his attention to the Carbon Fivers’ challenge he said:

“The Carbon Fivers team completed some very hard miles and it is fantastic that so much has been raised for Winning Scotland.

“They took on and conquered their own Everest over more than 500 miles, inspired by my own madcap idea to do it non-stop. That’s not something I would advise!

“The North Coast 500 is a beautiful cycle route, although I did find myself cycling in a ski jacket in mid-August! It has been great to see so many people stepping-up for the challenge.

“It is one thing to talk about it in the office or the pub, but these guys saw it through in some tough conditions.”

Rider and Carbon director Mark Christie, reflecting on some of the more challenging moments of the ride, said:

“There were hard miles and some dark, dark times, but knowing that youngsters across Scotland will benefit from the sponsorship so generously donated by corporate partners and individuals makes it all worthwhile.”

Winning Scotland Foundation chairman and former Scotland rugby international Sir Bill Gammell accepted the £35,000 cheque for the charity, saying, “It is a fantastic achievement by the team from Carbon.

“Carbon are owed a huge thank you for their support and for sharing our vision for encouraging children to be the best they can be, learning from their failures and achieving things they didn’t believe they could in all aspects of their lives.”

Donations can still be made at https://mydonate.bt.com/fundraisers/carbonhighland500