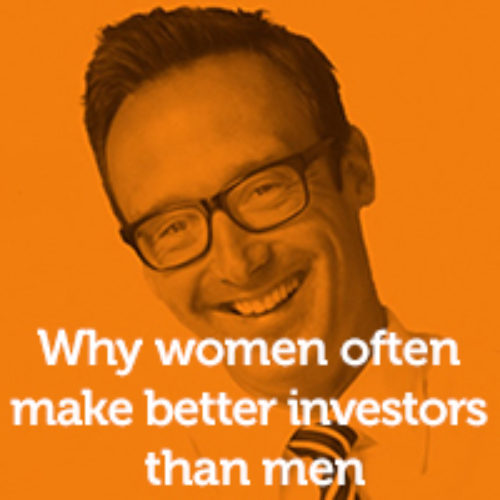 There can’t be many sectors of the economy that are more male-dominated than the investing industry.

Only around 10% of mutual funds and hedge funds have female managers, and women account for fewer than a quarter of financial planners. Evidence also shows that although men and women tend to share financial decisions generally, decisions specifically about investing are made overwhelmingly by men. Women also tend to think they know less about investing and are less confident about making decisions than men.

The irony is that several academic studies have concluded that women actually make better investors than men — and that includes professional investors. A study conducted by Terrance Odean and Brad Barber at the University of California found that although men trade 45% more often than women, their average annual risk-adjusted returns are 1.4% smaller per annum.

So, why should this be? Well, there are probably a few contributing factors. Generally, for example, women are more cautious than men, and also less competitive. Once they have thoroughly researched a subject and decided on a plan of action, they are often better than men at sticking to it; nor are they as likely to follow the herd.

Yet it is during periods of market volatility, when individual markets can go up or down by 5% or more on a single day, that women tend to have the real edge over men.

Research by Betterment, an online wealth manager based in the US, shows that most of the time its male and female customers behave remarkably similarly. Women, however, are far less likely to panic when the markets start to slide. They are 45% less likely than men to sign into their accounts to check how their funds are performing, and they change their asset allocation 20% less frequently.

Betterment also found that male customers were far more prone to ‘erratic behaviour’. For instance, men were six times more likely than women to dump all their shares or all their bonds in one go.

Again, why this should be makes for fascinating discussion. There are those, for example, who put it down to biological differences between men and women. Scientists have demonstrated that increased testosterone levels can cause male traders to become over-confident and take on more risk, especially in stressful and competitive situations.

Others would argue that psychological factors are more important than biochemical ones. Faced with a problem — any problem, not just financial uncertainty — men generally like to do something about it, to take action. Women, on the other hand, often just want to talk about it first. They want support and reassurance.

Of course, it’s easy to generalise. There are many women who make very bad investors. Similarly, there are many men who are acutely aware of their behavioural biases; they have learned to keep their emotions in check, and when their friends and colleagues are bailing out of shares, or, indeed, piling in and throwing caution to the wind, they are able to keep a clear head.

There are important lessons that men can learn from these various studies. Yes, there are times when it’s very hard not to react to what’s happening in the markets or the economy. But almost invariably, for those who have the right financial plan in place, the best course of action is to do nothing.

It’s also very important for women to realise that they have a valuable role to play in discussing these issues with their own financial advisers, husbands or partners. For either party, leaving investment decisions to your other half, or making them on your own without seeking their opinion, is rarely a good idea.

The author of this post was Richard Wadsworth, Financial Planner at Carbon Financial Partners, you can view Richard’s profile here.