Training and reflection from Carbon’s riders 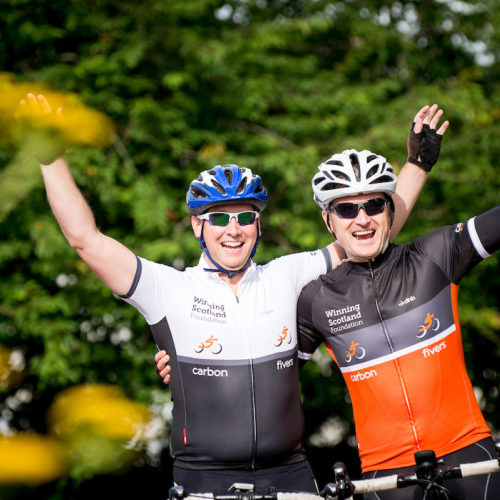 A couple of months ago, motivated by the Carbon Fivers Highland 500 challenge, Mark, Iain and Richard, headed north for their grandly labelled ‘training camp’. The aim was to see some of the route, and to also get some back-to-back days in the saddle. It turned out to be a great trip, both in terms of the weather and views, but also for successfully putting into context how difficult a challenge this is!

The camp kicked off with an early start from Aviemore, initially cycling north through Carrbridge then beyond the snow gates towards Lochindorb. After a quick coffee in Grantown-on-Spey the route wound eastwards along the river Avon towards Tomintoul and to a much-needed lunch stop in Bridge of Brown. A welcome tailwind allowed for a highly enjoyable afternoon ride, taking in the surrounding Cairgorm landscape on the way back towards Coylumbridge. A good first day in the saddle covering 82 miles, 5,000 feet of climbing and, impressively, a post-ride cold bath for Mark.

Day 2 included part of the Highland 500 route and one of the hardest cycling climbs in the UK, the renowned Bealach Na Ba. Things started comfortably with a slight downhill alongside the single-track Kyle of Lochalsch railway, stopping in Lochcarron for coffee overlooking the golf course. The first warm-up climb came soon after with a short, sharp ascent over into the next valley, then round to the extremely intimidating base of the Bealach, an apparent cliff face ahead.

Past the Bealach café, the climb began with everyone commenting on how ridiculously nervous they all felt. About half-way up it got steep, then steeper, and it just went on and on. Battling, switching in and out of the saddle against the gradient, Mark, Iain and Richard willed their pedals on. Eventually, the switchbacks (where the trails turn sharply back on themselves) arrived, offering huge relief just before the top – all parties elated to have finally made it.

More terrifying was the descent to Applecross with steep downhills, tight corners and rocky precipices. Once in Applecross, a well-earned lunch was served up at the oasis-like Potting Shed, the thrill and drama of the Bealach still in the back of everyone’s mind.

After lunch, the Applecross to Torridon route was absolutely spectacular, epic even, though really tough. The Bealach climb is a classic but comes with a sting in the tail in the form of the rolling route to Torridon.

The last leg was a long climb out of Kinlochewe but, strangely, this was welcome after the rolling terrain on the coast. Soon after that, the car was spotted: a wonderful sight – 92 miles, 7,000 feet of climbing, and no tears (just).

Day 3 comprised of a drive to Rothiemurchus, before a 2,000 feet climb over 20 miles up to the Cairngorm ski centre. Another tough morning for the legs after a challenging weekend, however the fine view at the top was a fitting reward.

“The hardest parts of the training rides by far were the rolling roads along the coast between Applecross and Sheildaig. The uphills were just long enough and just steep enough to hurt, with the downhills not quite long enough to recover. Your breathing was just about under control again, and then the next uphill hit! We are going to have to get used to this, most of the route is like that!”

“The chance to participate in an event like this doesn’t come around often, so I jumped at the opportunity! I find the idea of doing something as physically and mentally challenging as this, and also for a great cause, really satisfying. The training has been tough, but the most useful thing I’ve learned is how important both preparation and recovery are off the bike.”

“The training days were a great test and for me it showed my body could cope with multiple days in the saddle, but more importantly that this challenge is very much a team event. It’s crucial we help each other during those darker moments when struggling on a climb, running low on energy, or just need a general pick me up. When ascending the Bealach Na Ba some strong words of encouragement from Richard helped me grind out the steepest part of the climb and ride non-stop to the top. Later that day all our energy levels began to wane, but we grouped together and all took turns at the front to get us home. Both are great examples of the camaraderie we will need on the trip and it’s great to know we have that already. I can’t wait for the ride to start for real now.”

The Carbon Fivers team will start the Highland 500 Fundraising Challenge from Inverness on 29th of August and will finish back at Inverness on 2nd September.

A huge thank you to our new sponsors SARN Technologies, Johnston Smillie and Craneware for their generous support.

If you would like to sponsor or support the event in any way and associate yourself or your business with Winning Scotland Foundation then please contact either:

Or you can donate here: