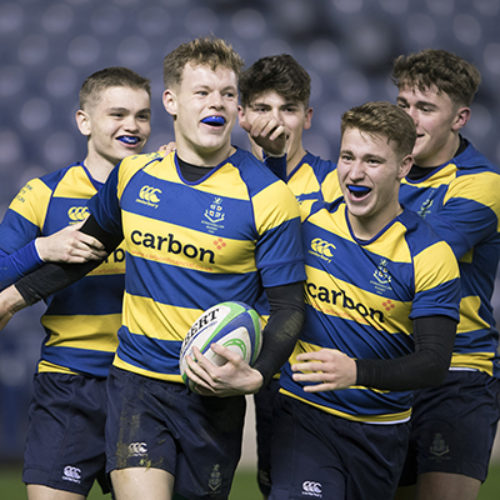 Scottish rugby is on a high after impressive autumn tests performances against Samoa, New Zealand and Australia, with a highest ever world number five ranking secured.

But the impact of Townsend is already being felt at the grassroots level.

That’s the view of Andy Henderson, director of rugby at Strathallan, winners of the Scottish U18 Schools Cup after defeating Perthshire rivals Glenalmond College at Murrayfield.

“Gregor came out with his statement that he wanted his team to be the fastest in the world, and that doesn’t just mean running. Speed of thought, rucking and execution also comes into it.

“We had a big meeting with the age grade coaches and Toonie gave us a presentation on his thoughts. We were all buying into it. It is something we definitely took on here at Strathallan. We encourage 15-man rugby, although conditions weren’t ideal in the final given the wind and rain.”

The Carbon name appears on the blue and gold Strath jerseys and in the wake of the record-breaking, try strewn 52-8 final win Andy said: “We had so much support from former pupils, and not just guys who have gone on to have successful rugby careers.

“I had to put my phone away at the final. I was getting messages from all over the world. We had reminded the boys it wasn’t just about them. They were representing the school and there was a debt to be paid to everyone who had helped them get to this stage. It was payback time and they did us proud.

“Gordon Wilson and Carbon have been strong supporters, with a genuine love of the game. This is the third year of Carbon’s sponsorship so it’s great to be able to reward this with a Schools Cup Win.

“It’s Strathallan’s first ever cup win and fair play to Glenalmond in reaching the final of a competition that is traditionally dominated by the Edinburgh schools.

“What a thrill it was for the boys playing at Murrayfield. Just being in the changing room was exciting for them, then you have the walk down the refurbished tunnel, which looks awesome.

“You go to Murrayfield as a boy with your dad dreaming of this sort of thing. These lads got their chance and it is a massive privilege that the SRU put the match on the big pitch.

“These boys made history for Strathallan and will have memories that will be with them forever.

“We lost a try in the opening minute but there was no panic in the ranks because the coaches Ed Kalman and Yamika Banda and myself had worked on that potential scenario and the lads took it in their stride. We had it covered.

“I was remarkably calm, for the first time ever! I had faith that they were ready and we had done everything we could.

“We have had good sides in the past and come up short in the semi-final but the monkey was off the back with the win over Watsonians.”

Carbon managing director Gordon Wilson said: “Congratulations to the Strathallan team and well done Glenalmond on reaching the final. It was a wonderful occasion to be part of.

“Both schools have a proud record of producing top class rugby players and hopefully we will see some of these youngsters who featured in the final going on to make a name for themselves at the international level.”