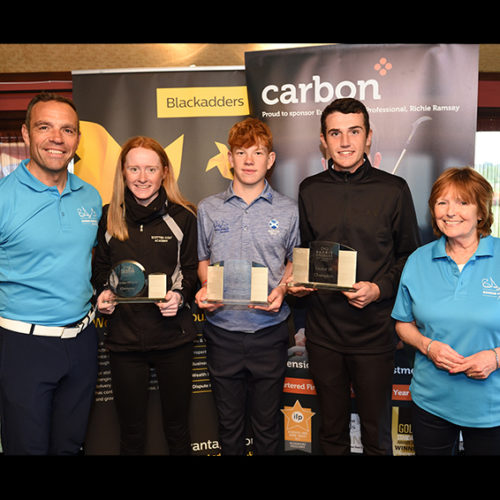 The Foundation, created in memory of the former Scottish boys and R&A selector, aims to encourage youngsters into golf, and other sports.

This season, the Foundation has teamed-up with Foundations sharing that ethos created by Ryder Cup veterans Paul Lawrie and Stephen Gallacher.

The ties have paved the way to “The Race to the Machrie,” with leading junior boys and girls enjoying an exciting end of season event hosted by the four star Islay hotel and re-shaped links course.

The Junior Masters U18 title was claimed by Lochgelly’s Dean Walsh, with Gregor Graham of Blairgowrie retaining his U16 title and Aboyne’s Carmen Griffiths capturing the inaugural girls championship.

Foundation trustee and top Scots coach Spencer Henderson paid tribute to the Strathmore team for providing a “magnificent venue” for the annual event.

He added: “We are grateful for the generous support from Carbon Financial and other like-minded businesses who appreciate the value of encouraging youngsters into sport.”

Pictured at Strathmore Golf Centre are (from left)