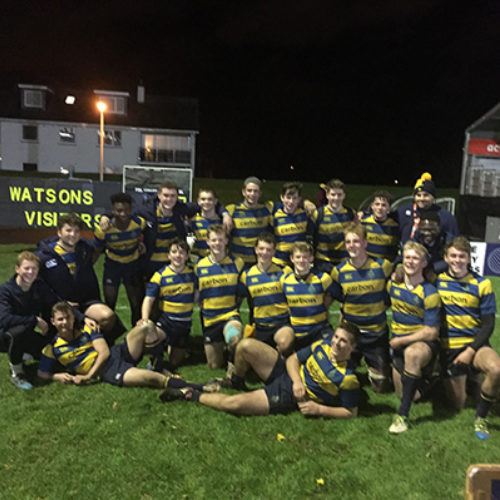 STRATHALLAN School is heading for Scotland’s Home of Rugby!

Their 1st XV saw off George Watson’s College 21-3 in a hard-fought encounter at Myreside to book a much coveted place in the final of the Scottish Schools Under 18 Cup.

The Strath team – whose blue and gold shirts are sponsored by Carbon – now have a December 6 date in their diaries, when they face Glenalmond in an all-Perthshire clash at BT Murrayfield.

Carbon managing director Gordon Wilson said: “Reaching the final of this prestigious competition is a major milestone and reflects very well on the rugby set-up at Strathallan.

“We are delighted for director of rugby Andy Henderson, the team and everyone involved.

“We have seen Strath producing players for the Scotland international squad and hopefully there are many more to come in the years ahead.

“Everyone at Carbon wishes the Strath team well for the final in December and we will be cheering them on.”

Andy Henderson was delighted that the Strath players had finally seen off their “nemesis” after a string of defeats at the hands of GWC.

“I was proud of the players and they have now reached the final of the U18s which had eluded us. We have been receiving messages of congratulations from all over the world.

“That is fantastic but I have been stressing the job is only half done. They now have to match that courageous performance against Glenalmond.”

After a hard-fought first half which failed to yield any points, Strath seized control of the semi-final through the power of the pack and tries from Alex Marsh, Finlay Laird and Ollie Smith – two in the closing minutes – were converted by the boot of Angus Vipond to seal a memorable victory.

The win came hard on the heels of a victory against Stewart’s Melville College in the quarter finals.

Strathallan rugby is highly regarded, with Zander Fagerson breaking into the Scotland side and his brother Matt, Jamie Ritchie and Murray McCallum all involved with the international squad.

FPs Cameron Fenton and George Horne have stepped-up into the full-time pro ranks, while Josh Henderson and Bruce Lockhart are currently gaining experience within the Stade Francais club as part of a Scottish Rugby Union initiative.