Passing wealth to the next generation… What are parents worrying about? 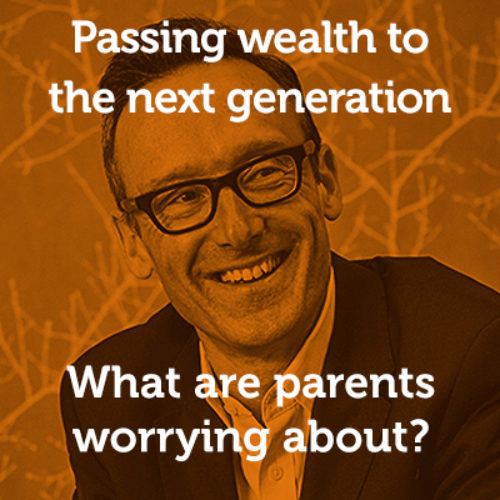 In the first of our blogs about how to pass money on to your children, financial planner Richard Wadsworth looked at how people decide what is the right amount of money to give. Here, in his second blog, he asks, what are parents worrying about?

Parents worry about a whole lot of things: children going ‘off the rails’ with drink, drugs or other harmful pursuits; family money ‘leaking out’ through the divorce or separation of children from partners; and they don’t like the taxman claiming another share of their wealth on death.

But the main concern, in my experience, and this accords with research both in the UK and the US, is much less dramatic. Parents are most concerned that the prospect of a large inheritance encourages their offspring to do nothing useful with their lives. It is a concern once expressed by one of the Vanderbilt family, heir to $60m, in 1885, when he declared that: “Inherited wealth … is as certain death to ambition as cocaine is to morality” (Fortune magazine).

John L. Levy, who has 25 years’ experience in private practice working with individuals and families on issues involving inherited wealth in the US, goes further, commenting that many wealthy children experience considerable suffering and a sense of deprivation because, while they might have a lot of money in their bank accounts, they have little self-respect.

“It’s hard for them to take much satisfaction in their accomplishments since they always suspect that their successes are at least partly the result of the wealth and position they have inherited.”

In the book The Millionaire Next Door – The Surprising Secrets of America’s Wealthy, authors Thomas J. Stanley and William D. Danko have another suggestion to make, based on their extensive research: “…in general, the more dollars adult children receive, the fewer they accumulate, while those who are given fewer dollars accumulate more”.

Stanley and Danko go on to warn parents against what they call ‘economic outpatient care’, where parents subsidise their children’s lifestyle and rob them of basic financial discipline, namely, spending less than you earn and saving the balance.

Billionaire investor Warren Buffett agrees, saying that giving the kids too much money can be ‘harmful’ and ‘an antisocial act’.

And there’s another wealthy individual quoted in Fortune magazine, who says, “To me inheritance dilutes the motivation that most young people have to fulfil the best that is in them. I want to give my kids the tremendous satisfaction of making it on their own”.

So, now we know what parents worry about. But what do they do? In my next blog I take a look at some of the different pathways parents take towards giving their wealth away to the next generation – or not!