Passing wealth to the next generation… Seven top tips: Nos. 4 & 5 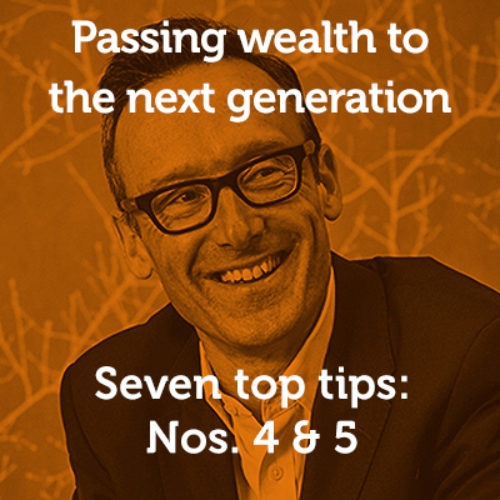 Following on from our last blog which featured ‘top tips’ numbers 2 and 3 for clients looking to pass money on to their children, we continue today with tips 4 and 5, ‘Don’t give cash’ and ‘The gift of giving’.

Some parents decide to directly reduce the child’s mortgage or pay off student loans rather than give the child cash in their hands.

A long-standing client of mine makes ISA subscriptions for each of his children every year and, from time-to-time, as he receives cash from investments or paid projects, he pays off a proportion of their mortgage. He feels that this is a sensible approach because, while he is confident his children are mature in relation to money, he prefers not to put the temptation to buy ‘stuff’ in their way. A little distance between the child and cash, he thinks, is good.

Giving children investments also helps, of course, to teach them about savings and investment, a responsibility which, in due course, they are likely to have to take on.

Top Tip 5 – The gift of giving

Joline Godfrey, in her book Raising Financially Fit Kids, talks about making children aware of charitable giving and philanthropy more generally from an early age. She states that “philanthropy is a powerful way of connecting kids to something larger than themselves”.

Parents can talk about their approach to philanthropy and perhaps suggest that the child aims to ‘tithe’, giving a tenth of their income (or whatever they receive, be that income or capital) each year, and that the child chooses a charity that they are interested in.

For wealthier families, the child might become involved with the family foundation, or the child may even establish a foundation of their own.

Many see philanthropy as forming one of three ‘homes’ that income/capital should be split between, the other two being saving and spending. There are now even piggy banks which have three or even four separate sections (the fourth being ‘invest’), labelled accordingly to instil this message from an early age. Is this the modern-day equivalent to jam jars being put aside to meet the various household expenses?

In our next and final blog we conclude this series on passing wealth on to your children with two final ‘top tips’, arriving at the conclusion that it really isn’t just about the money, money, money.