Passing wealth to the next generation… Seven top tips: No. 1 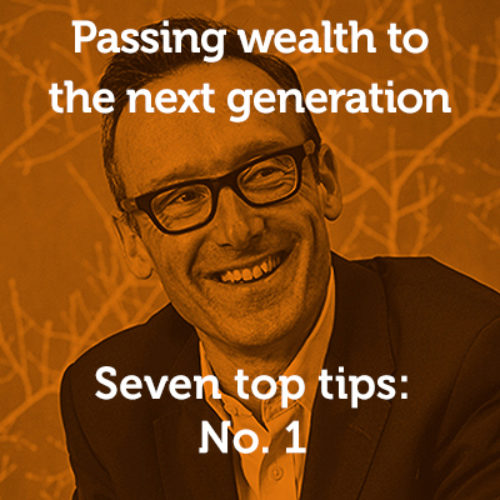 Continuing our feature on how to pass on wealth to your children we look at some of the options available to you. Here are some thoughts drawn from my own experience and the experience of others who have researched this issue in depth.

Let your children know what they might get and where it came from. One adviser suggests that talks about money, like those about sex, should begin as early in life as possible. That might be awkward, but it makes sense. Chicago-based multi-millionaire Lester Crown states: “we started when the kids were young and put the dollar signs in as they got older.”

The approach of talking about money early but only adding “the dollar signs in as they get older” is one which Thomas J. Stanley and William D. Danko, authors of The Millionaire Next Door – The Surprising Secrets of America’s Wealthy, might approve of. They don’t believe in telling children that the parents are ‘wealthy’ and they think that children should only be made aware of wealth once they themselves have “established a mature, disciplined, and adult lifestyle and profession ”: “Make sure you communicate that the wealth wasn’t magic but emerged from the vision, ideas, risk-taking, and hard work of someone along the way”.

For some families, however, putting off the discovery of wealth might be more difficult due to the public position of a parent or the lifestyle they lead. In those situations, it is important to talk about where the money came from. Joline Godfrey, in her book Raising Financially Fit Kids, talks about framing wealth and giving the children a context for it. She suggests introducing the family legacy by answering the question, how was wealth made? If it was passed down the generations, parents should emphasise the qualities and character of those who stewarded the money. If the money has been made by the parent, what was life like before the money arrived, and what did it take to make the money? In other words: “make sure you communicate that the wealth wasn’t magic but emerged from the vision, ideas, risk-taking, and hard work of someone along the way”.

As part of this, parents may involve their children in decisions about the parents’ affairs. This might be about investing more in the business or how to fund university costs. The idea is to prepare the children for decisions they will have to make in due course.

So, don’t let the kids live in fairyland! Tomorrow, ‘top tips’ 2 and 3: ‘Practice makes perfect’ and ‘Eat your greens’. All will be revealed…