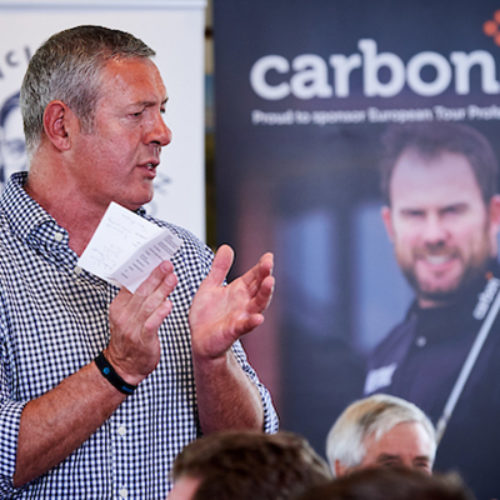 The Foundation established to support grassroots rugby and other sports in memory of the legendary “Voice of Rugby” holds a range of fundraisers throughout the year across Scotland and Carbon were proud sponsors of the event held at a Perthshire club where we recently became “Premier Partners.”

Runners-up, six off the pace, were the team from Graham Environmental, based in Blairgowrie, featuring company directors Ross Graham and Phil McKenna, Grant Ager, chief executive of Fairfield Housing, and Euan Donaldson, of OcaLED Lighting.

Matt, a five handicapper at Royal Burgess in Edinburgh, was presented with the nearest the pin prize at the 15th on Rosemount by Linda Lawson, Bill’s daughter and Foundation director.

Carbon MD Gordon said: “We were delighted to sponsor the Foundation golf day and it was great to see former Scotland stars like Gavin and Tony turning out for an annual event held in memory of legendary commentator Bill McLaren.

“The Foundation does fantastic work nurturing rugby and other grassroots sport – and fostering values close to Bill’s heart.

“It was great to have the sun shining and see Rosemount in such fabulous condition.”

“Blairgowrie Golf Club did Scotland proud in hosting the 2014 Junior Ryder Cup and you can see why the reviews were so glowing.

“Once again it was marvellous to enjoy generous support from Gordon and our friends at Carbon Financial Partners. We are grateful for their backing.

“The support from businesses across the country is integral to the success of the Foundation.”