Learning to live with uncertainty 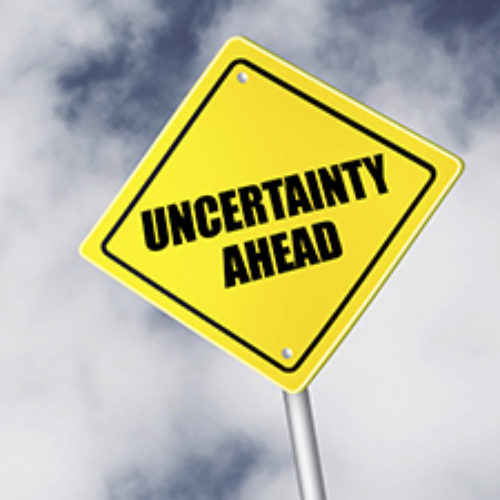 Anyone who knows about the financial markets will tell you that if there’s one thing markets don’t like it’s uncertainty. Markets actually handle bad news pretty well. Often, for example, share prices rise when a report comes out showing, say, that unemployment or retail sales are down — usually because the news is not quite as bad as analysts had feared. But what markets really can’t abide is fear of the unknown.

We seem to have had more than our fair share of uncertainty lately. The vote on Britain’s membership of the European Union caused months of market jitters; the narrow victory for the Leave campaign then caused severe short-term volatility as the markets digested the implications. We can expect similar turbulence in the months ahead as the US presidential election unfolds.

Meanwhile, the appalling terror attack in Nice has prompted fresh concerns about Islamic extremism, and the attempted coup in Turkey is another reminder of how fragile some states are.

Hard though it is to be unemotional about these sorts of events, particularly for those directly affected, it is nevertheless very important not to let our emotional response to major news events affect our investment decisions.

The fact is that the world is an uncertain place — it always has been and always will be — and we often have little or no control over the events that affect our lives. Yes, society can reduce the threat of terrorism, and diplomacy can help to prevent potential wars, but violence and conflict will never go away. Similarly, although all of us can play a small part in reducing climate change, that won’t stop devastating natural disasters occurring from time to time.

Part of being a successful investor is accepting uncertainty, even embracing it. It’s the uncertainty after all that provides the risk, and risk is the source of investment returns. Of course, there is no guarantee that risk will lead to reward, but you can’t expect a reward without being exposed to it.

You certainly shouldn’t be worrying about the outcome of an election from an investment point of view. Remember, the market is like a giant computer that gauges the opinion of millions of people around the world as to what a particular asset is worth at any given time. All known information is already baked into prices.

Nobody knows what the future holds, or how markets might respond to events that may or may not happen. There are so many variables and so many factors that we simply don’t know about. So why fret about something over which you have no control?

There are all sorts of myths about investing in the run-up to a US presidential election. Some say you are better off out of the stock market until the winner is known to avoid volatility; but the data shows that markets have delivered pretty decent returns during election years. Others say that a Republican president is best for the markets; in fact, historically, whether there’s a Republican or Democrat in the White House has had very little impact on US equity markets.

No doubt, whoever wins in November, there will be countless pundits speculating in the media as to what it actually means. Investors will be urged to buy this or sell that. The problem is, that for every recommended investment strategy there will be someone making just as strong a case for doing the very opposite.

Another important point to bear in mind is that markets absorb new information very quickly, and prices are adjusted accordingly. By the time you have decided to react, it’s already too late. So, adjusting your portfolio after an event like Brexit, or a surprise election result, is also a bad idea.

For investors with a plan in place that accurately reflects their capacity for risk, the best course of action before and after the US election is to do precisely nothing. Yes, there may well be a correction, but on the other hand, the result could cause a market surge. Don’t try to guess the outcome. Whichever way it goes, life will go on regardless, and the best bet you can make is that, over the long term, markets will continue to sustain themselves and grow.

Faced with an uncertain future, having a broadly diversified, evidence-based portfolio and a long-term outlook really is the right approach.