Intergenerational planning – making the most of the new pension rules - Blog No.4 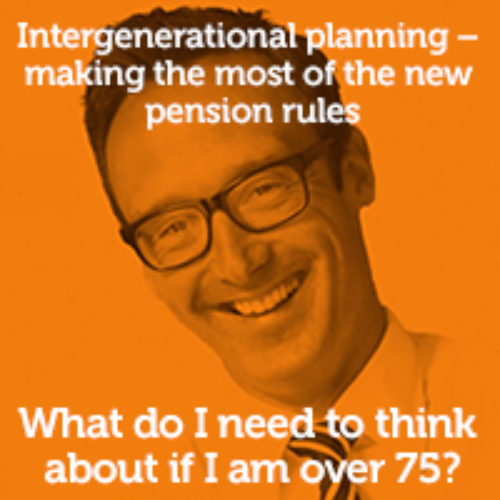 If you are 75 or over, your remaining pension funds are potentially taxable on your death, and the rate at which tax is payable depends on your situation.

I want to pass some funds to charity

If pension funds are paid to charity on your death after the age of 75, they will pass tax-free to the charity (as they would do if you were under 75). However, again, there may be good reasons to deal with charitable donations through your Will instead, especially if inheritance tax (IHT) will be payable on your estate. This is because there may be ways to pay a reduced amount of tax on pension funds passed to family members, and that rate may well be less than the certain saving of 40% IHT if assets are passed to charity via your Will.

I want to pass some funds to specific individuals

For the 2015/16 tax year, where funds are to being paid directly to an individual, these will be paid after a tax deduction of 45%. While this is a reduction on the previous rate of 55%, the charge still represents a loss of nearly half the value of the funds.

From the 2016/17 tax year, when HMRC hope their systems will be able to deal with a further change, the rate of tax payable will be the recipient’s marginal rate of income tax. This means that the rate will depend not only on the size of the fund they inherit, but also their overall income.

At the extreme end, someone inheriting a relatively small fund (say, £10,000), who has no other income, might have 0% tax to pay. But if they inherit a greater amount, or have a greater existing income, they will need to pay a higher rate of tax in line with their marginal rate (20%, 40% or 45%). Potentially, then, they could pay up to 45% in tax on their overall income (including the inherited funds). This may be acceptable, but there is also potentially a better way to arrange matters.

Paying funds to an individual via a pension

In my last blog I made a case for the under-75s, where they know exactly who they want to pass their funds to on death, to direct these funds not to the individual via their Will, but to a pension fund in the individual’s name.

There is an even stronger case for doing this after the age of 75. On death, after the age of 75, funds can pass to a pension arrangement with no tax on the transfer, i.e. 100% of the value of the pension passes to pension beneficiary. What’s not to like? This has to be the optimal arrangement.

“On death, after the age of 75, funds can pass to a pension arrangement with no tax on the transfer, i.e. 100% of the value of the pension passes to pension beneficiary. What’s not to like?”

Income tax would subsequently be payable when the beneficiary draws an income from the pension, and the rate would be determined by their other income and the amount withdrawn from the pension.

What if I don’t know whom I want my funds to go to?

If you don’t know whom you’d like to leave your pension funds to (and this is more common than you may think), or at the very least are looking for a certain amount of flexibility, I’ll look at the options available to you in a later blog.

First though, next week, we look at a practical example of how your money can help your grandchildren finance their university years and get a foot on the property ladder.

Richard is a Chartered financial planner, Certified financial planner, Fellow of the Personal Finance Society, Fellow of the Institute of Financial Planning, and Affiliate of the Society of Trust and Estate Planning. He works with clients in Scotland and in London and has particular expertise in helping individuals and families pass wealth down the generations. View Richard’s profile here.