How would Sherlock Holmes invest for retirement? 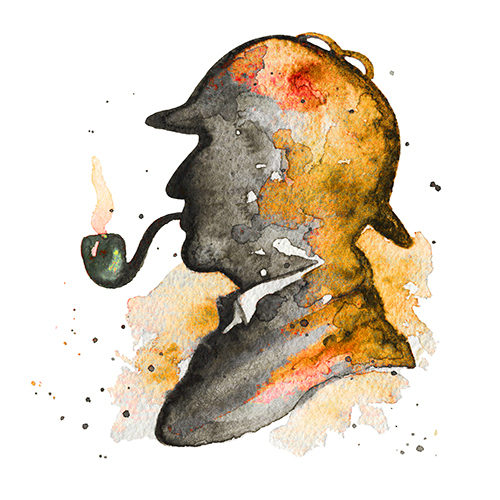 If, like us, you’re a fan of Sherlock Holmes, you may have noticed that a new 50 pence coin commemorating his creator Sir Arthur Conan Doyle was recently released by the Royal Mint.

The new coin marks the 160th anniversary of Conan Doyle’s birth and features the silhouette of the world’s most famous fictional detective, complete with deer stalker hat and pipe.

The coin set us thinking how, given his extraordinary intelligence and minute attention to detail, Sherlock Holmes would have chosen to invest his money.

Holmes is famous for his use of the science of deduction, sometimes known as deductive reasoning or ‘top-down’ logic. It’s a process that involves linking a series of statements or promises to a logical conclusion.

“It is a capital mistake to theorise before you have all the evidence”, Holmes explains in the 1887 novel A Study in Scarlet. “It biases the judgment.”

Elaborating on the idea in A Scandal in Bohemia, published four years later, he says that if you try to come up with a theory before you have the data, “insensibly one begins to twist facts to suit theories, instead of theories to suit facts”.

So, what has this got to do with investing? Well, the financial services industry is full of people making promises they can’t keep – promises about ‘beating the market’, about picking the best stocks, about market timing and about guaranteed returns.

Much as these offers can be tempting for those of us looking to grow our wealth and adequately fund our retirement, they don’t really stand up to scrutiny.

The truth about beating the stock market

The truth is, markets are hard to beat consistently. Picking stocks in the belief that prices are wrong is like betting on the horses. It can go either way. Not even the professionals are much good at market timing. And as for guarantees, think about this: if there were no risk in investing, why would there be an extra return over cash?

In a world of slick marketing, spin and hype, the idea of respecting evidence is frequently undervalued. As the great Scottish philosopher David Hume once said, “a wise man proportions his belief to the evidence”.

The truth, as academics and organisations like Morningstar and Standard & Poors have repeatedly shown, is that consistently beating the market over the long term is extremely hard. Winning fund managers don’t tend to repeat year-to-year, and even the very few that do tend to capture any additional returns for themselves by charging high fees for their superior skills.

So, why are markets so hard to beat consistently?

What does the academic evidence tell us about traditional money management?

There are dozens of studies illustrating the difficulty money managers have in outperforming the market consistently:

We’re as sure as we can be, then, that were he alive today, Sherlock Holmes would take a pretty dim view of the actively-managed fund industry. Basing a strategy on theories rather than facts is the most elementary mistake an investor can make.

[2] Luck Versus Skill in the Cross Section of Mutual Fund Returns, by Fama, Eugene F. and French, Kenneth R., December 2009).