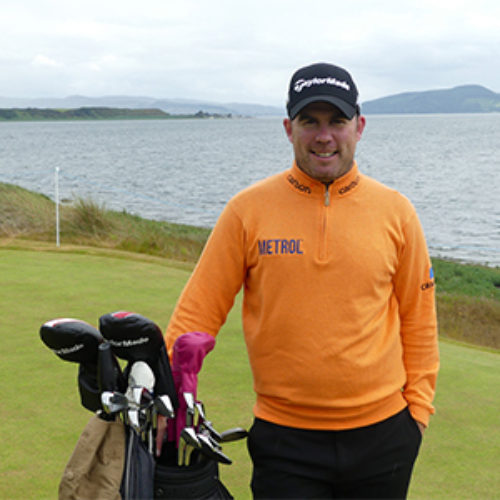 Carbon’s European Tour ambassador Richie Ramsay enjoyed his biggest career pay-day when he finished joint second at the recent Duty Free Dubai Irish Open at Portstewart, paving the way to the 146th Open championship this week at Royal Birkdale. In his latest blog the in-form Scot looks forward to competing in another Major and joining US Ryder Cup star Matt Kuchar and Kiwi Ryan Fox in Thursday’s opening round, with Carbon’s orange and black colours to the fore on Friday.

“Hopefully my prep goes a bit better than last year at Troon. I had played well at the Scottish in the lead-up but caught a bug and had a horrible time of it. I was bedded for the whole of the Tuesday and managed to walk the course just the once and only hit 25 golf balls before starting the first round. Despite that, I only missed the cut by one.

“Finishing second in Ireland was a huge boost to my confidence. You really can’t underestimate just how big that week was for me.

“It was great playing to my potential and in a Rolex event to boot. It will make the next six months a lot more stress-free and allow me to build a schedule aimed at making the Race to Dubai.

“One of the main goals for 2017 was to get back to Dubai at the end of the year.

“I’m at 21 just now and a friend sent me a screen grab of the current standings. I’m in some good company, with Rory (McIlroy) on my shoulder.

“It’s nice to see your name up there. It shows I’m on the right path and that justifies all the hard work I have been doing away from the course.

“Looking to The Open, I want to build momentum on the golf course and while I am pretty straight off the tee that means the short game will be key again.

“Royal Birkdale is one of the best courses on the rota. Obviously it has a lot of history but the back nine is a lot like Royal Aberdeen, which I grew up on.

“It will be a very good test of golf, tough and tricky because you are changing direction constantly. The weather forecast is for a breeze to get up but hopefully it won’t be as tough going as Saturday at Dundonald for the Aberdeen Asset Management Scottish Open.

“I shot level par that day and it was a battle. I finished off with another par round on Sunday but felt I left shots out there.

“You have to handle whatever is thrown at you weather-wise at The Open and simply embrace the challenge. Padraig (Harrington) had to dig in and he coped better than anyone when he won the last time at Birkdale.

“Because we are past the Tiger era there are just so many players who could win the Claret Jug this week. There are maybe eight or nine guys who are a step above the rest if they bring their A-game.

“But outside of those, there is any number who could step up and win a Major. That makes for an exciting tournament. And it is great for spectators.

“Henrik (Stenson) won last year at Troon in that thrilling shoot out with Phil (Mickelson). What an incredible finale that was.

“It is a tough call trying to predict who might win it this year.

“Tommy Fleetwood will be fancied as a home-based player. He controls his ball flight well. But he is on home soil so that will bring added pressure.

“I wouldn’t be surprised to see Rickie (Fowler) in the mix. He was solid at Dundonald and the likes of Dustin Johnson, Justin Thomas and Jordan Spieth will all fancy their chances.

“Justin (Rose) has fond memories of playing well at Birkdale from his amateur days. The golf course suits his eye and he is a premium ball striker.

“Competing at this level is what it is all about, testing yourself against the best, and I am looking to make a real push for those precious ranking points.”