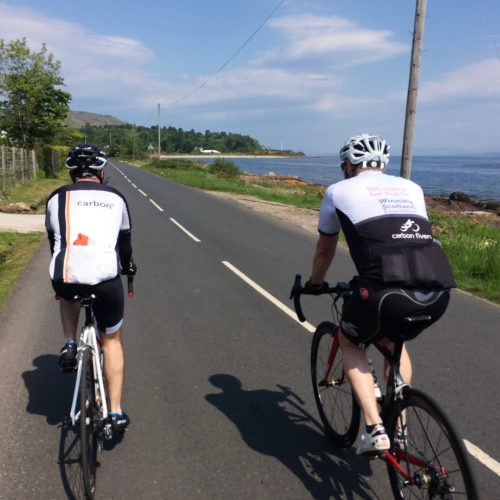 Thanks to all who came along to the Five Ferries cycle at the end of May. Thankfully there was no last-minute cancelation this year (unfortunately we had to cancel in 2014 and 2016 due to adverse weather) and we were rewarded with beautiful blue skies and sunshine. However, a headwind in the latter stages certainly added to the challenge!

The first leg was a traffic busy but easy roll down the coast from Wemyss Bay to Ardrossan where we boarded the ferry to Arran, along with what seemed like every other cyclist in Scotland! This was the longest crossing of the day – but we used the time to fuel up wisely with bacon rolls and pancakes (that I enjoyed a bit too much!).

The second leg took us along the east coast of Arran from Brodick to Lochranza. Here we encountered the first real climb of the day, so it was a relief to arrive at the brilliant Arran Distillery for a pre-arranged lunch of soup and sandwiches. Some of us found eating nuclear warm soup in 20 degrees heat more of a challenge than the cycle!

Ferry 2 took us from Lochranza to Claonaig, where we immediately lost 2 cyclists due to a severed derailleur! Thankfully the rest of the group had an uneventful ride over to Tarbert where we quickly found shade and ice cream to help cool down in the increasingly hot conditions.

We begrudgingly finished our ice creams in time to catch ferry 3 from Tarbert to Portavadie, where the sugar was quickly needed for the big climb up from Tighnabruaich! It was then a pretty easy roll down to Colintraive with a slight delay due to a puncture (big thanks to Fraser using quick thinking to seal a tear in my tyre using a ferry ticket – genius!).

After a very short wait at Colintraive we boarded Ferry 4 for the short hop across to Rhubodach for a very enjoyable roll along the coast to Rothesay. Then it was just a case of relaxing on Ferry 5 back to the cars at Wemyss Bay. Another fantastic trip with some great people.

Keep an eye out for more info on our ‘easy rides’ in Edinburgh (out into East Lothian) on 21st July and Perthshire on 18th August. These rides are aimed at enjoying an easier more sociable pace with coffee and cake mandatory.