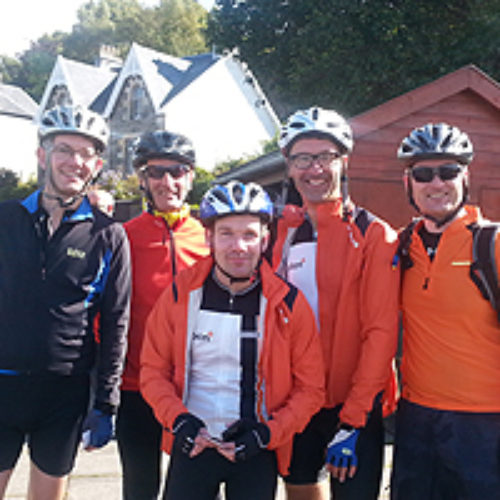 At the start of September, a dozen or so of us completed the Five Ferries cycle; the weather was fantastic and a great day was had by all.

The statistics for the day:

The trip started at Wemyss Bay in the west with a cycle down the coast to Ardrossan Harbour. From there it was onto the ferry for bacon rolls and coffee while sailing over to Arran. The Arran cycle leg started with a gentle meander around the beautiful east coast of the island before the big climb up ‘The Bogle’, which had everyone gasping for breath, heart rates only fully recovering once we had cruised down to Lochranza.

Following a sandwich at Lochranza, the next ferry took us to Claonaig, from where we cycled up and then down to Tarbert. The next ferry took us to Partavadie and the start of a tough, rolling climb, eventually taking us high above the Kyles of Bute before blasting down to Colintraive to catch the short ferry over to Bute. From there it was a team ‘time trial’ along the coast on the flat with a light tail wind pushing us along, before all collapsing onto the ferry back to Wemyss Bay.

Thanks to everyone who came along and made it a great trip, and thanks for cycling up all those hills!