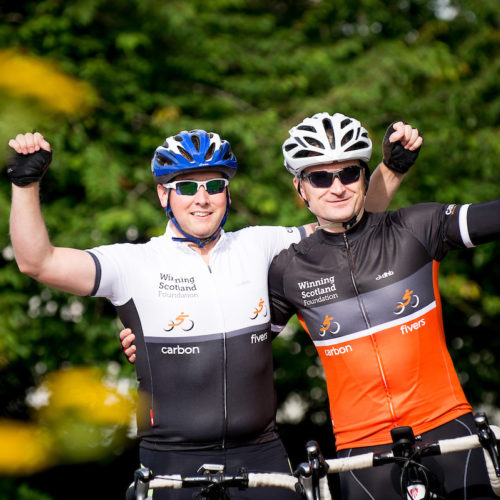 After the 75 mile ride, Carbon director Mark Christie commented, “today we climbed 4200 feet of undulating terrain in fair weather. Rides like this highlight how tough a challenge it is going to be riding an average of 100 very hilly exposed miles on five consecutive days. It is going to be an extremely tough week but all for an extremely good cause.”

The Charity’s role models will provide advice, support and encouragement to the Carbon Fivers team cycling the Highland 500. It’s a mountainous route around the North of Scotland that will require a total climb of 33,500 feet from the riders, more than the height of Everest.

“The route is very demanding physically, however with the support from the charity’s champions, we will be prepared to the best level we can be.”

YOU CAN MAKE A DONATION HERE.

The Carbon Fivers team will start the Highland 500 Fundraising Challenge from Inverness on 29th of August and will finish back at Inverness on 2nd September.

If you would like to sponsor or support the event in any way and associate yourself or your business with Winning Scotland Foundation then please contact either: