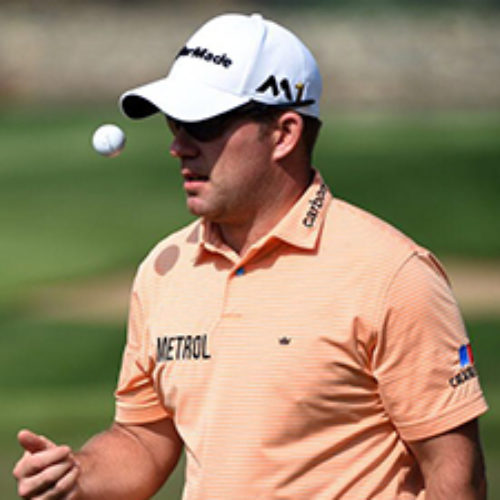 It’s back to work for Richie Ramsay, Carbon’s ambassador on The European Tour. So we caught up with the Scot to talk over his ambitions for the 2017 season, beginning with the Middle East Swing, which sees him competing in Abu Dhabi, Qatar and Dubai over the next few weeks.

“I’ve had a few days working with my coach, Ian Rae, in Dubai, in advance of my first tournament of the year, the HSBC Championship in Abu Dhabi.

“I can’t wait to get going again. It has been a busy off-season because I had a lot of testing to do after being with Taylor-Made for so long. They are heading in a new direction and have released quite a lot of players. So I have had to test out club options and find the best ones for me.

“I have spent endless hours looking for clubs I am comfortable with and which will give me the optimum performance. You can only test at certain times back home, even with the mild weather we have had up here recently. But I got out and about on various golf courses and accessed the range facilities at Renaissance, Murrayfield and Bruntsfield.

“If it hadn’t been so mild I would have had to head abroad much earlier. But I got out when it was a relatively mild seven or eight degrees, and even on colder days when it was crisp and clear.”

Richie admits that mentally he’s turning back the clock preparing for the new campaign. He explained:

“You get to play fantastic golf courses in great weather in the Middle East Swing. So I am tapping into the schoolboy golfer in me. I’m viewing this as a great opportunity, golfing in sunshine and short sleeves while everyone back home is shivering!

“I was playing at Renaissance recently with four or five layers on and still got a chill. Out here I have had a chance to prepare for tournament golf in perfect conditions.

“Looking ahead, I want to get back in the Race for Dubai; breaking back into the top 60 would be nice and an obvious target is another win on Tour. That is always there at the start of any year.

“But initially my aim is to dial in those wedges and start the season by making as many birdies as possible.

“I struggled a bit in Abu Dhabi earlier in my career but have slowly but surely found my feet out here. I had a decent top 20 performance last year.

“Qatar is generally windy and a tricky set-up. And I feel I should have played better in Dubai over the years.

“It would be nice to make an impression there because my wife Angela and baby Olivia are coming out for some sunshine that week. There’s a crèche and that will give Angela a chance to follow me, hopefully for four rounds, and there are always a lot of familiar faces in Dubai.

“Olivia is just over 10 months now, healthy and growing. This time last year there was a sense of anticipation with the birth imminent.

“Being away from your family for weeks on end is something many people in business will identify with.

“Someone said to me the other day I was away a lot so there must be a lot of stress being apart from the family. But it doesn’t really matter what field you are in these days, spending time away from home and facing deadlines and handling stress can be part of everyday life.

“There is huge synergy between golf and business. I pay close attention to how businesses operate and see if I can pick up any pointers in going about my own business, which happens to be about getting a golf ball in the hole in as few shots as possible.”

While he narrowly missed out on making the Race to Dubai finale last season, Richie enjoyed sixth place finishes in China and at the Aberdeen Asset Management Scottish Open at Castle Stuart, while a remarkable birdie-strewn 11 under par 61 at the Portugal Masters was another 2016 highlight.

“I played really well in places last season and was in a good place with my game and mentality towards the end. I’m looking to pick up where I left off.

“My game was solid and stress-free. So the aim is to get into contention again and I know it will all come together.

“I love competing against the best players in the world. It’s such a buzz, a real thrill. It must be like when you are in business striking a deal with someone. It can be addictive.”